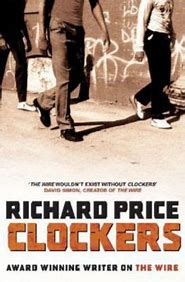 If you happen to be looking for a drug to take up, crack cocaine has a lot to offer. It’s attractions aren’t just the intense thirty minute high but also the paraphernalia that goes with it. This type of pipe smoking lends the pastime a hobby aspect. It also creates career opportunities among vulnerable groups. However, despite these benefits, I think I’ll give the drug a miss because after reading Clockers by Richard Price, I discovered crack cocaine has a fatal downside: it’s a bit morish.

Crime fiction doesn’t feature high in my reading. There is no particular reason for this and I’m sure I’m missing out on a lot. The trouble with genre fiction is that it exists on its own. There are few references from other books which lead me to this remote but happy valley. So it takes an exceptional crime novel to gain my attention.

According to the blurb, Clockers is the inspiration behind The Wire. In fact Richard Price was one of the writers of this TV series. I’ve never got round to watching it because I’ve never warmed to the American big-tough-guy-in-a-big-tough-city thing. But Clockers is different. Here, nobody is tough, or sexy, or witty, or handsome, or charismatic. It’s a little like real life in that way. And real life is what happens in the projects of a New York suburb called Dempsey, most of whose denizens have succumbed to the pleasures of the pipe.

The book is set, and was first published, in 1992. The dealers communicate by call boxes and pagers. The action is primarily in the dialogue which explains why Clockers transferred to television as The Wire so successfully.

The story centres on Strike, a nineteen year old crack cocaine dealer called Ronald Dunham but is known through most of the story by his street name, Strike. On the streets of Dempsey, there are no surnames. Throughout the story there is little reference to the outside. It’s as if nothing else matters.

Banks offer us consolidation loans. These put all your card debts into one so there is only one debt to worry about. Addiction to crack cocaine does something similar. Instead of worrying about work, money, health and relationships the addict worries about just one thing: the next fix. In this complex world, the addict has a much simplified life.

Strike occupies a lowly, customer-facing position known as a ‘clocker’. His boss Rodney, is pleased with Strike’s work especially his innovative marketing ideas such as Happy Hour and Starter Kits. Strike also keeps the three golden rules of drug dealing. If dear reader, you happen to be contemplating such a career you may wish to make a note of them: 1) trust no-one 2) maintain good quality and 3) don’t do the product.

The strange thing about Strike is that he never expresses emotion. So we neither like nor dislike him. If he does feel anything it is fear but this is suppressed. There doesn’t even seem to me much lust or yearning for friendship or greed. Dealers cannot bank their earnings and they cannot draw attention to their wealth so it’s all in the form of cash ‘rolls’. These are either in their pockets or stashed in an elaborate system of hiding places.

And yet the dealers never have the courage or imagination to escape. America is a big country. Couldn’t they get a bus somewhere and start afresh? This thought does occur to Strike but he feels an irresistible force pushing him to return to his life as a clocker.

There is one other character crucial to the story and that is Rocco, a Homicide cop or as he’s referred to throughout, a Homicide. Rocco is investigating a murder which is at the centre of the story. Drug dealing is outside his domain so he pays no attention to it unless it directly relates to a murder.

A good story has to have the main character go through a change. And this happens in Clockers, but not until the last few of the 360 pages.

In London we also have crack cocaine and gang crime. But it somehow seems different here. The projects occupy whole swathes of cities whereas in London, council estates are interspersed with private housing so council tenants don’t feel such a sense of isolation. But the US has the advantage of offering a huge hinterland in which to escape and start again. It is the land of reinvention. Strike realises this at the end. But what took him so long?